CALGARY, ALBERTA – Spartan Controls is excited to announce its sponsorship of Team Bottcher, one of Canada’s most exciting and talented teams on the Canadian and World Curling Tours.

Brendan Bottcher, (skip) is an Application Specialist at Spartan Controls, and has had a prolific career capturing the Canadian Junior and World Junior titles in 2012. Team Bottcher also represented Canada at the 2013 Winter Universiade and Brendan was the nation’s flag bearer for the opening ceremonies in Trentino, Italy.

“Spartan Controls has a long history of engaging with our local communities,” said Scott Foster, VP at Spartan Controls. “Team Bottcher is a great brand ambassador and we are looking forward to following their road to the Olympics.”

Along with his team, Karrick Martin (lead), Brad Thiessen (second) and Darren Moulding (third), he had a breakout year in the Pinty’s Grand Slam of Curling series during the 2014-15 season reaching the semifinals at all three events in which they competed. Martin is the son of curling legend Kevin Martin, the 2010 Olympic gold medalist and winner of a record 18 Grand Slam titles.

"We hope to align ourselves with corporate partners who share in our principles of teamwork, courage and leadership,” said Brendan Bottcher. “This exciting partnership with Spartan will allow us to showcase our strengths and continue our success into the coming seasons.”

Team Bottcher is the back to back winner of the Alberta Men’s Curling Championship and in 2017 they won the right to compete at the 2017 Canadian Olympic Curling Trials. As the team embark on another four year Olympic cycle they are dedicated and determined to make their dream of representing Canada at the 2022 Winter Olympics in Beijing a reality.

Our automation solutions are used in all process industries including oil and gas, oil sands, mining, pulp and paper, power, pipeline, and municipal. We are dedicated to providing exceptional customer experiences where expertise and collaboration come together. 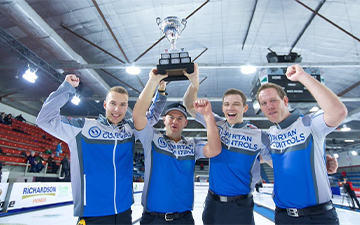 Spartan Controls is pleased to announce it is the exclusive representative for Fike in Western Canada. Fike is a global leader in the manufacturing of rupture disc technologies, and this new partnership will offer customers unparalleled capability, experience, and local support.
Read More
News release

Spartan Controls is pleased to announce a new strategic partnership with Computrol Systems, a leading developer of proven dispensing control and management systems for critical liquids. Combining their respective strengths in water distribution, this agreement will leverage each company’s expertise and technology to provide a complete turnkey solution to customers in both Canadian and US markets.
Read More
News release

Spartan Controls is pleased to announce it is now the exclusive distributor for Fluenta’s gas measurement technology in Western Canada. Fluenta, a global leader in ultrasonic measurement and management technology for the oil and gas and chemical processing industries, brings over 30 years of dedicated design and application expertise in flare flow measurement.
Read More